Museum in a Box is the third R&D project to come out of Good, Form & Spectacle, a London design firm working in cultural heritage. The box is mainly a device we can use to explore ideas around the working space of The Small Museum. Depending on how it goes, it could become an independent endeavour.

2016.01.03
Update: We’ve made a new website just for Museum in a Box. There’s a lot more info there on how far we’ve come since The Small Museum project.

Museum in a Box is just what it says on the tin box. The idea is to be able to create a box of objects from museums around the world, and have it sent to your school or your office or to home. You’d get a fun package of replica cultural objects along a theme that interests you. We’re thinking literally to organize brown paper packages tied up with string. What fun! 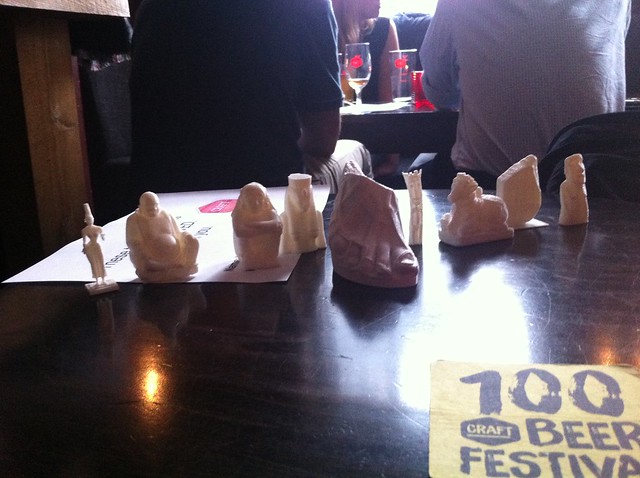 This is the very first prototype museum set. Photo taken by George on March 13 in the Clerkenwell Craft Beer Co. pub.

Actually, the Box itself is an interesting object too. We’re thinking a lot about packaging and ways to explore fun ideas for the box. Perhaps people might start to create their own boxes too! Or maybe you just get your Museum in a Box in a bag in the post, and it’s up to you to make their housing. 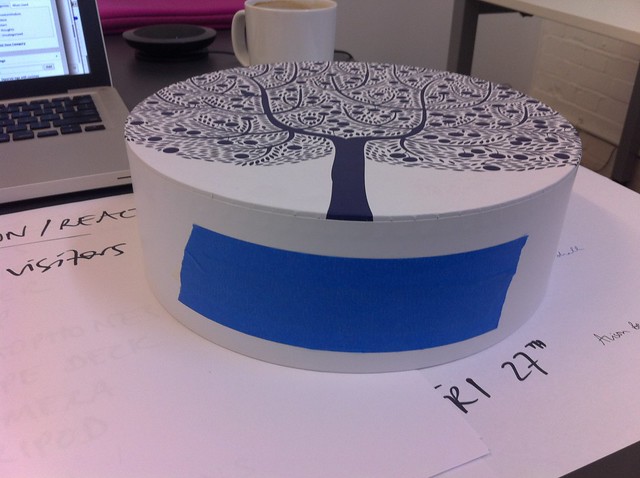 This is the very first prototype box. A repurposed round box I got some nice Royal Doulton mugs in.

But, the real challenge, we think, is working out what to show alongside the objects. If they’re inert, they’ll quickly gather dust, but, what if they’re alive?

What’s in the box?

Version 1 of Museum in a Box has a selection of 10 objects from the British Museum collection. The 3D models were created for us through photogrammetry and 3D printed.

Good question. We’re going to take the prototype around to various groups (Somerset House, the local library etc) to see what people think. We’re already imagining a series of different sorts of uses for it, and we’d like to get the prototype in front of people like:

Why are you doing it?

There are several ideas we want to explore with Museum in a Box. We’ll be writing more about these in the coming weeks and months.

For now, you’ll have to imagine what these mean, or think about what they mean to you and tell us what you’ve decided. 🙂

We are George Oates, Harriet Maxwell and Tom Flynn. We’re working on the project through Good, Form & Spectacle, in London.

If you’re interested to work on this idea with us, do please say hello. We need help with all sorts of things from packaging to content development to 3D printing to IoT stuff and everything in between.

How are you making it?

We’re starting small and growing through ideas, prototyping and feedback.

So far, as of March 16, we’ve just gotten our very first prototype set of objects. There are 10 things from the British Museum collection which Harriet is writing up over the next few days. Here’s a picture of the set we have so far.

We’re immediately starting a public test of the idea at Somerset House, starting March 18 for a fortnight. Frankly, we don’t know what the outcome will be, but our goals are to a) generate lots of conversation and content about the idea, and b) to try to create a handful of interaction models for connecting the objects to content about them.

When can I have one?

Ha ha! Well, you could arrange to buy one of our prototype sets if you’d really like one. But, it’ll be expensive! We estimate that creating another set like our prototype and sending it to you would cost about £350. Not exactly affordable, yet. But, if you want one now, by all means let us know.

If we manage to attract funding for the project — which we are seeking — one of our next R&D questions is to look at getting the cost of manufacturing down, or looking at other models of distribution and sales. If you have ideas or experience in 3D printing and fulfillment, we’d love to hear from you.

It’s possible we’re talking about all this a bit too soon, and very far from stealthily, but, we think it’s a fun idea, and important to build community around, otherwise it won’t work.