So far, we’ve talked about ethics and collections.

George: Let me start by saying that, even with just 10 objects in the collection, I was already nearly overwhelmed by the prospect of maintaining inventory and docs. But, importantly, my primary goal for the entire exercise was to generate content about it, the exercise itself.

As I noted in Gathering Digital Content for the Archive, one of the research ideas we’re working on is making digital content, news and opinions about museum objects part of their official records. Our idea with the WordPress pages for each object was to give each object a home online, and then to add information and content to that page as we found it. We built out the initial views for each object from British Museum tombstone records, and other information uncovered on the highlight pages there. Harriet added Google maps where we could see a location, and images of the objects.

It was also good to use WordPress, I think, because we just get a whole bunch of web-native features right off the bat. Thirty8 Digital has been doing great museum-y WordPress-y work for ages.

This is an important idea for The Small Museum. How can we use the breadth of web content to our advantage? How does information and knowledge about these things change over time? This is what we’re referring to on the Good, Form & Spectacle homepage when we say “contextual benefits of networked metadata.”

To date, we’ve just added information about what we did with each object in the collection over the course of the residency at Somerset House. I can easily understand how that could become a full time job. I’m also interested in seeing what web scraping technology, RSS and other types of “web listening” could annotate an object’s official record with context from the web. All sorts of questions there.

This kind of idea is a bit different from tools like Archive-IT, from the Internet Archive. That’s designed to archive individual websites to see how they change over time. I’m imagining something that’s at the same time more fine-grained, but also with a broader reach. Something like a slurper that’s like Google News for each object.

As an example, it seems like the British Museum should be collecting the sort of content and opinion that’s being written about the Parthenon Marbles on The Guardian. Don’t you think?

I’ve been thinking about the idea of a “minimum viable record” since I led the Open Library project at the Internet Archive.

The basic step is to collect as many identifiers about an object as you can. Once you have those stored in a giant array, you can use them to do lookups into their host services. It’s a giant headache to get two (let alone fifty) slightly different semantic systems to play nice, so I thought of this as a way to avoid that issue. (There’s still the challenge of recognizing an object across two systems though, to be sure. Even the distinction between vernacular, official and colloquial gets tricksy with primary/original objects, like Parthenon Marbles vs Elgin Marbles.)

You can see the early seeds of this minimum viable record in the columns we chose for the data, where we’re immediately trying to create connections from our records into BM, Wikipedia, and the 3D model repository, My Mini Factory:

I was also encouraged to see that Getty released its database of some 650,000 artists names onto the web the other day, available as Linked Open Data under the Open Data Commons Attribution License (ODC-By) 1.0. This is just good. It would be nice to be able to annotate that with IDs and URLs and URIs that refer to the same people. I’m also not the only person thinking about the need for radical simplification.

Harriet made some really handy labels for each object. They were handy because they contained basic metadata about their object, but could also be easily moved and positioned around the museum space. Here’s one for Goddess Hathor: 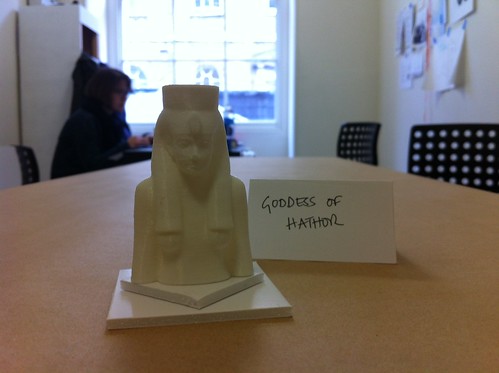 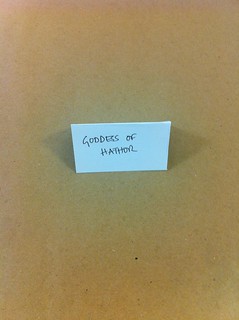 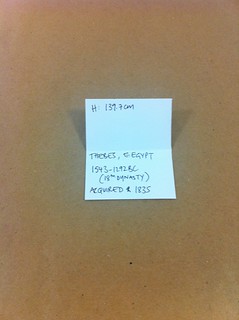 They were simple and manoeuvrable.

We were all a bit surprised and excited when Dr. James Lattin brought us one of his own Museums in a Box – our first donation! The only inventory we’ve done so far of this event (and the new object) is the blog post I just linked to, a tweet or two, and another mention right here. This is exactly the sort of mention or tendril about an object it would be good to collect methodically.

Our first bequest was also utterly charming, thanks to its creators, Arthur and Henry Maxwell, aged four and two.

Both of these events made me ever so slightly nervous that we’d quickly become a Museum of Museums in Boxes. Not the end of the world, but, I suspect that’s how a lot of small museums grow quickly.

There’s also a digital element to acquisitions here, about digital rights management. Acquiring something new is a great opportunity to clarify how a digital surrogate of an object may be used. Of course, I’m all talk, because I completely failed to do that in the course of these two events.