OK, here’s the idea. There are 11 chapters in the UNESCO Running a Museum handbook (and we’ve added a twelfth, Commerce). Harriet and I will be writing on one chapter at once, in the order they’re listed in the handbook. So, to start, we’re writing about ethics. We thought you might enjoy a comparison between our observations, so we’ll combine our reports into a single post for each chapter. A little background about us both, too… George is a web designer essentially, with a penchant for clever, friendly interaction design. I have about 20 years experience making software. Harriet recently left the British Museum after nine years, having made her way into a senior content production role. OK. Here goes.

George: Let me start by saying I’m not a “museum professional.” I am maybe a bit more like an artist/designer type who’s circling around what museum means, and is indeed liberated in that “amateur” position. That said, I’ve been around museum professionals in all sorts of partnerships and engagements for the last eight years or so, so it’s not as if I’m stumbling in the dark. In fact, the challenge for me will be to try to practice Shoshin, or beginner’s mind; to stay open, eager and to beware preconceptions as I study The Museum.

On that note, it really didn’t take long for me to realize the real power (and potential ethical quandries) of an editorial point of view when describing things for the public. Our collection of ten objects from The British Museum’s collection lent itself easily to making our displays and work be about how those objects came to be in the collection of the museum. From Hoa Hakananai’a’s unearthing to the lonely Nandi Bull, these stories of imperialism and acquisition formed the central theme of Version 1. It opened lots of conversations about repatriation and the nature of collections, to be sure. Personally, I think the BM collection is incredible and stupendous because it’s collected so much, and actually, its biggest acquisition years came well after the peak of the British Empire’s colonial exploration (as shown by adjacent visualization work in another G,F&S project, Two Way Street). Diffusing it back into the world isn’t clearly better, not clearly the right thing to do. It’s amazing simply because of its scale. I think. As one visitor remarked, you could empty every museum. I certainly also felt a keen ethical pinch as visitors asked me and the team our opinions on such a big question.

A Live Experiment
Positioning ourselves as both a small museum and a live experiment seemed very approachable to people. Using “museum” as a descriptor immediately seemed to create certain conditions in people’s minds. But then, to say we’re were making things up, and changing things every day, and taking lots of photos, and talking about the whole shebang in public changed some of those conditions, and favourably too.More than one visitor told us how much they enjoyed being able to talk with us directly, and hear directly from us about what we were doing. You might say that should be in the remit of any and all museum professionals’ work, but as Allegra Burnette just tweeted, Richard Evans says “as you progress in your museum career, the further and further away you get from the visitor.” 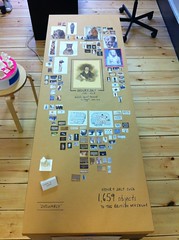 This work of interpretation is fraught with ethical challenges. Boy! In one of our pieces, which we called “Diplomacy,” my not-so-secret motivation was to be intentionally incendiary. It was a day spent thinking about the Goddess Hathor, and we discovered in the object’s description that she’d been acquired from a man called Henry Salt. He was British Consul-General to Egypt in the early 19th Century, and our scant research identified him as, let’s say, a colourful character. We deliberately wrote the phrase “Henry Salt sold 1,659 objects to The British Museum” on the display, even as we knew that Hathor, in particular, was bought via an auction house. Even as we made this display, even just discussing the semantics of bought vs sold and being open and honest about our superficial research into Salt, that openness created an excellent stage for some really interesting conversations about the nature of museums. You can also see — again from Two Way Street’s “acquired from” list — that Henry Salt is hardly the largest “giver of things” to the museum, and the data says that actually 1,679 things were acquired from him. (That was an unintended error by me, that incorrect count.) By highlighting him directly, and constructing a display with a certain feel, we were able to crack open a conversation I don’t think you’d ever hear within the walls of the official institution. (I’m happy to proven wrong on that.)

Working in Public
We documented the work heavily, taking hundreds of photos, writing loads of blog posts and tweets, and talking directly with anyone who entered the room. I wonder if there’s something to that style of approach generally for institutions. It just seems better all round from where I sit to be open and proactive about showing your work. Perhaps there’s something to be learned there from the way that software folks work these days. Prototyping, deploying basic minimum viable things, writing up your process, sharing code and all that has helped to generate and now facilitate a wholly new way of working. There are some museums now talking about working with an Agile mentality — where Agile is a style of software project management — so I suppose that’s good.

I’m wondering too if there’s actually an ethical angle to this; to work in public and be explicit about things like acquisition and deaccession and funding and conservation and stuff like that. Every museum has skeletons in its closet though, so that’s a tough one. To sum up my feelings on ethics, I don’t think it’s actually that appropriate to subject our short residency/art project to the same level of scrutiny that a Proper Museum should be. As you’ll read in the next chapter, we were absolutely in a liberated position because our collection was so small and actually copies of official things. If anything, we mostly probed at the sorts of ethical things that the handbook suggests every museum should be scrutinized about, perhaps in the context of some kind of post-imperial environment we now find ourselves in.

Harriet: When I worked with the British Museum collection as my day job, I was always acutely aware of my responsibility to the original cultures from which the objects came. I wanted to be sensitive and considered in my treatment of images of the objects and in my language when talking about them. I was also aware of my responsibility to the institution – not to bring it in for any flack. For obvious reasons all text and crops of images for publication would go through multiple sign off procedures. Kind of understandable, but kind of frustrating. There are some huge ethical questions about the way in which a lot of the objects came into the collection. It was hard work avoiding them.

So when I was thinking about the ethics of The Small Museum collection, my first thought was “phew”. I don’t think we had any ethical dilemmas about how we’d acquired our collection – all our objects were 3D prints.

No dodgy diplomats or controversial acquisitions were involved.

We didn’t have particularly sensitive objects, they weren’t human remains, we wouldn’t be facing requests for repatriation of cultural property and there were no conflicts of interests with (non-existent) sponsors or donors.

One paragraph did however pop out: “Museums should respect the integrity of the original when replicas, reproductions, or copies of items from the collection are made or used in display. All such copies should be clearly labelled and permanently marked as facsimiles.”

All the objects in our display were copies. I guess we thought that was super obvious, so we didn’t label them as such. I hope none of our visitors felt duped.

We chose to bring some of the ethical questions about acquisition squarely into focus through our displays. This was extremely liberating for me! In putting some of our 3D objects back into something closer to their original context, I felt we were able to  pay respect to the original cultures from which the objects came. We played Hoa the ambient background noise (the waves off Easter Island) he would have originally heard. I particularly liked putting Nandi Bull back in context, in the Museum he’s in such an austere setting, cold and lifeless. It felt right to put him back in a vibrant setting of noise and colour and people.

Don’t get me wrong, I do recognise the dilemma – we wouldn’t have had these objects to 3D print from if the Museum hadn’t acquired them.

On a more specific note, the handbook mentions the need for accessibility in this chapter. We adopted a Show Everything approach, published the collections database on github and did all our prototyping in public. So I think we did a pretty good job on that. As for the accessibility of our display, we found that we hadn’t considered all of our potential visitors, but I think this should be covered in another post ‘Caring for the visitor’.